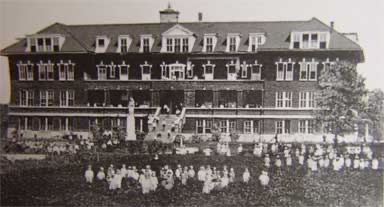 “Every theatre has a ghost.” Mr. Wand said matter of factly after being asked the question: “Do you have anything to say about the possibility of Benet being haunted?” While he did not have any personal encounters to share, he confirmed that the presence of ghosts in Benet was likely (if you allow yourself to believe in ghosts).

In fact, based on a small survey (a snippet of past and present Benet students), a majority of Benet students have had a ghost encounter themselves. 57.5% to be exact. One current Benet student, senior Victoria Ligas, stated, “The sealed closet door on Benet third floor started violently rattling while I was up there.” With no one else around, this kind of activity seems suspicious.

Junior Chris Picchione also experienced a spooky situation. “During Orchesis one day, there were ghost noises coming over the intercom. The same day, some girls in a dance saw a figure in the light booth. They asked Mr. Wand who it was, but there was no one up there.” Some things can be explained, but these seem a little too random to be planned, be a coincidence, or explained by science.

It’s not just the students who have had a brush with the supernatural. Both Mr. Leffler and Señor Marth had stories of their own to share when asked about haunted happenings. “The lights in St. Daniel’s Hall go on and off of their own accord. This has happened during productions, and interestingly enough, it is called ‘ghosting.’” Mr. Leffler was happy to share his contact with the unknown, while Señor Marth was more skeptical.

Until 1959, Benet Academy was home to St. Joseph’s Bohemian Orphanage and the fourth floor of Benet and Joseph Halls were used as dormitories for the orphans. Tragically, there were some deaths among these orphans (hence the graveyard on Benet’s property) and there are rumors that these ghosts haunt the dormitories. Señor Marth’s room is on the fourth floor of Joseph and has experienced doors randomly closing without any physical help. He attributes it to a sudden change in air pressure, but has nonetheless named the “ghost” in his room Annie.

So, the question turns to you, our readers, Benet students. Do you think that Benet, with its strange and unusual history, is possibly haunted? Or can each instance be chalked up to coincidence and be left at that? Check out the poll to this article and vote your answer!